Opera 5 is excited to announce our production of Suffragette a double bill of “Fête Galante” and “The Boatswain’s Mate” by Dame Ethel Smyth.

The show will be presented in late June 2017 at Theatre Passe Muraille Mainspace – 16 Ryerson Ave. 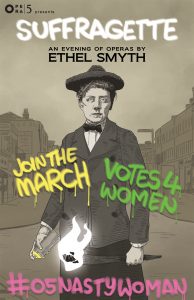 Dame Smyth was the first woman composer to have an opera performed at The Metropolitan Opera in New York City (Der Wald, 1903); she composed The March of Women for the Women’s Social and Political Union, which became the anthem for the suffragette movement; and her opera The Wreckers is considered by some to be the most important English opera to be composed between the period of Purcell and Britten.

We have an exciting Canadian cast of singers. The show will be directed by Jessica Derventzis and conducted by Evan Mitchell and will feature a chamber ensemble reduction.

Stay tuned for ticket information and more details on the show!