Opera 5 has teamed up with Gazelle Automations to bring puppets and opera together in a new web-series called “Threepenny Submarine.”

Join Lydian the vixen and Iona the cockatiel as they discover the bottom of the sea in the Threepenny Submarine learning from each other and working as a team. They even break into opera when the right moment strikes!

Musique 3 Femmes and Opera 5 presents the first-ever “OperaCon”, a digital pop-up connecting students, artists, and innovation in opera. Hosted by Opera McGill at McGill University’s Schulich School of Music, this inaugural 3 day event features artist-led discussions from across the country, exploring technology and its role in the arts, emerging arts leadership/entrepreneurship, and interdisciplinary collaboration. OperaCon features the participation by Canadian Opera Company, the Association for Opera in Canada, Amplified Opera, re:Naissance Opera, Uncommon Music Festival, Loose Tea Music Theatre, and the Banff Centre for Arts and Creativity. The event is made possible with the generous support of the Azrieli Foundation. All sessions will be streamed on Youtube Live. Registered viewers will receive a link to the stream prior to the event. (Kindly note that there are closed sessions which are ONLY available to students of Opera McGill and Association for Opera in Canada Fellows.) To register to attend OperaCon, visit: https://operacon.eventbrite.com 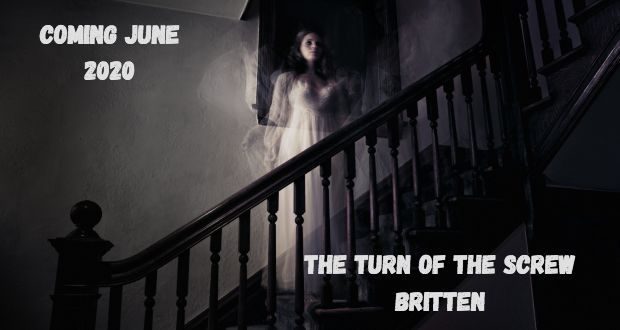 Opera 5 will be presenting Benjamin Britten’s The Turn of the Screw in June 2020! Stay tuned for more details!

On Friday, November 8, 2019 Tongue in Cheek Productions will join forces with Opera 5 to present Eight Singers Drinking at Gallery 345. In this concert, singers will each sing a set of songs inspired by a cocktail. These drinks will be freshly prepared by the skilled mixologists of Opera 5 and Tongue in Cheek Productions, and each of the “drinking singers” will be required to finish their drinks by the end of their sets. The audience will have the opportunity to enjoy their choice of the presented cocktail(s) before curtain, during the intermission, and after the show. The concert will feature an eclectic mix of music from different cultures and by various composers including Montsalvatge, Porter, Handel, Berlioz, Vaughan Williams, Viardot, and more to be performed by some of Toronto’s favourite interpreters of classical vocal music. The program consists of eight singers and one pianist, including Opera 5’s founding member and general director, soprano Rachel Krehm. She will be joined by mezzo-soprano Catherine Daniel, soprano Sonya Harper Nyby, tenors Ryan Downey and River Guard, and members of the Tongue in Cheek team: baritones Michael Nyby and Aaron Durand and mezzo-soprano Beste Kalender. All will be led by one-man-orchestra Trevor Chartrand at the piano.

Tickets are $35 general admission, $25 for arts workers. Tickets and more information are available at www.tongueincheekproductions.com.

We could not be more excited to announce a partnership with Musique Trois Femmes in connection with their prize for female identifying composers and librettists to create new Canadian operas. Musique 3 Femmes and Ensemble Vocal arts-Québec is pleased to announce the Mécénat Musica Prix 3 Femmes 2020, a national award totalling $25,000 supporting new opera creations by teams of Canadian emerging female-identifying composers and librettists. Winning teams will be mentored in their process by established opera composer Luna Pearl Woolf, participate in a workshop of their creations by Musique 3 Femmes and see productions in Montreal, Kingston, and Toronto, in collaboration with our presenting and workshop partners Opera McGill, La Société de Musique Contemporaine du Québec (SMCQ), Queen’s University DAN School of Music and Drama, and Toronto’s Opera 5. As part of Opera 5’s Open Chambers production in Toronto, Musique 3 Femmes and Opera 5 will pursue additional funding for the expansion and the orchestration of the three winning works for chamber ensemble and produce all the winning operas in one show together. The production will happen in Toronto in late 2021. Artistic Director of Opera 5 Jessica Derventzis will be one of the jury members for the prize. We are so thrilled to be involved in this prize that is making opportunities for these female identifying artists!

For information on the prize please see www.musique3femmes.com 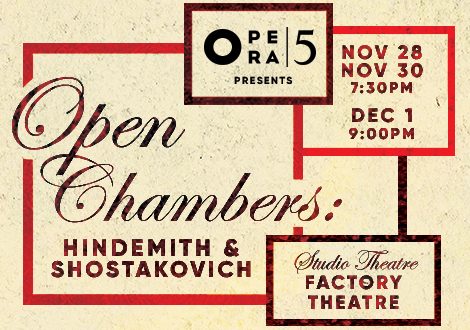 Opera 5 presents an hour long show of staged chamber music in the intimate Studio Theatre at Factory Theatre. Get an up-close experience of this dramatic and stunning music.

With the support of

Opera 5 has received its first Dora Nomination ever for Opera Division: Outstanding Performance – Ensemble. This is for the entire cast of Suffragette.

We couldn’t be prouder of the cast of Suffragette: Alexandra Smither, Elizabeth Polese, Eugenia Dermentzis, Asitha Tennekoon, Kevin Myers, Jonathan MacArthur, Jeremy Ludwig, Alan MacDonald and Jean Philippe-McClish on their nomination as the ensemble of Suffragette.

Thank you to everyone involved who helped the cast shine and thank you to our fabulous cast for giving all they had to this unique offering of Ethel Smyth’s operas.

Congratulations as well to our colleagues in Indie Opera T.O at Tapestry Opera, Against the Grain Theatre for their nominations. 31 out of the 42 opera nominations this year are going to independent opera companies, which are thriving in Toronto.

The Dora Mavor Moore Awards, named for Dora Mavor Moore and presented by TAPA, were founded on December 13, 1978 by a committee who decided to institute an award to recognize outstanding achievements in Toronto theatre.

Opera 5 is pleased to announce the appointment of Jessica Derventzis as Artistic Director of Opera 5. Jessica’s appointment follows the recent departure of Aria Umezawa from the role. Jessica is no stranger to Opera 5. She has worked with Opera 5 since 2016 as Production Manager, as well as co-directing the company’s 2016 production of Die Fledermaus, and directing the ground-breaking production of Suffragette in June 2017. Previous to these positions, Jessica was a volunteer for Opera 5 since 2014. Jessica next directs Il Barbiere di Siviglia for Opera 5 in June 2018.

The Board of Directors and the current staff could not be more thrilled to work with Jessica in a deeper artistic way to shape the future direction of Opera 5. Jessica is exactly the collaborative and visionary artist who will help take Opera 5 to the next level.

Since Jessica has been working for years with Opera 5, her transition to Artistic Director has been easy, and Jessica has quickly come up to speed in her new position. The team trusts Jessica to continue to set Opera 5 apart in the independent opera scene in Toronto.

Jessica Derventzis began her career in the arts with studies in piano performance at Queen’s University where she simultaneously worked as an accompanist for opera productions and collaborating with singers in the Voice Department.  Following graduation, Jessica taught theatre studies at the High School level for five years directing over twenty productions while mentoring her students to achieve a well-rounded theatrical education, including acting, designing, technical theatre, and theatre history.  Leaving teaching to pursue a professional career in opera, she has worked as a director and assistant director with Calgary Opera, Edmonton Opera, Winnipeg Opera, Vancouver Opera, Tapestry Opera, Opera Kelowna, Opera McGill, Opera Nuova and more. Jessica is also very active in and has deep connections to the indie opera scene. Under her own company, Stu&Jess Productions, Jessica has produced three programs in Montreal in eclectic and unique venues. She currently holds a place on the executive committee of Indie Opera TO and most recently was awarded the Metcalf Foundation Performing Arts Internship grant for 2018 to work with Tapestry Opera on directing, dramaturgy, and artistic direction.

Opera 5 presents Rossini’s classic comedy with a larger than life cast and crew that will sizzle. Check out our amazing team!

Check out a behind the scenes look at Suffragette to learn more about the shows and the characters in them!